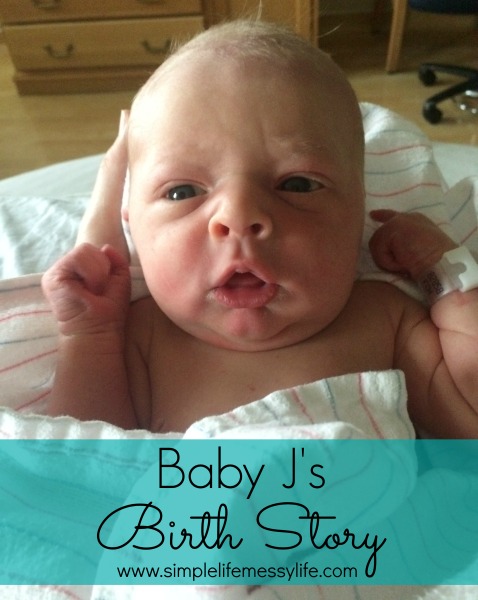 I had a feeling this one would come early.

I didn’t dare say it out loud for fear of jinxing myself. But part of me just knew (or maybe it was just really strong hope!) he would make an appearance soon.

I really didn’t want to be induced again, so I was praying this little one would make his or her way into the world before that was necessary.

We were all as ready as we could be and not knowing the gender made it even more exciting. We wanted to meet this baby! 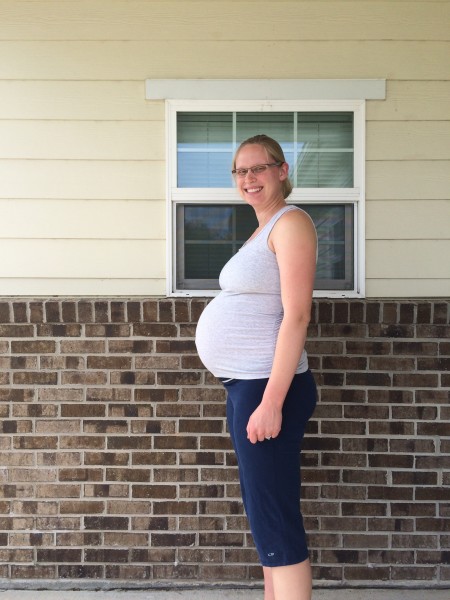 Tuesday morning I had my 39 week appointment (I was 39 weeks plus 1 day). When I was asked if I was having any contractions, I answered the same as I had for months. “Yep, tons. But nothing consequential.” I had had way more Braxton Hick’s during this pregnancy than with K, but nothing that ever amounted to anything… or so I thought.

The nurse-midwife I had been regularly seeing was aware that I really was hoping to avoid a second induction, so she offered to do a membrane sweep. I said “yes please!” and when she did it, she informed me that I was already almost 3 cm dilated!

We did go ahead an schedule an induction time for the following week, to be sure to have a spot before the holiday weekend, but she assured me that she didn’t believe I would need it. She didn’t think it would be long!

I left the appointment feeling hopeful, but also trying not to get my hopes up. Having a membrane sweep with K did absolutely nothing after all.

I took it easy the rest of the day, since the membrane sweep left me feeling a little crampy and “ick.” I finished everything I needed to in order to launch Summer Search for God, figuring it should get done if I wanted to release it before the baby came. 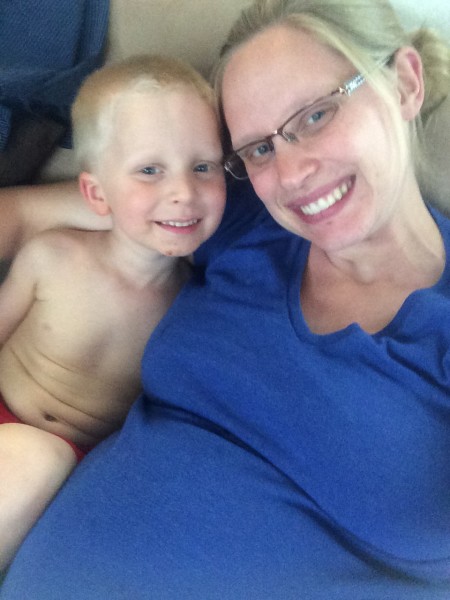 When that evening came I knew I should probably try to clean up the house a bit and get to bed early, figuring there was a good chance of going into labor the next day. However, I opted for sitting on the couch with my hubby watching TV and I headed up for bed around 9:30pm.

I took a shower and was crawling in bed at about 10:00pm when *pop* my water broke! I was not expecting that! I did a ninja like move to roll out of bed without getting the sheets wet and beelined for the bathroom. It wasn’t a huge bursting gush, but I was 99% confident that my water had indeed broke.

I called my husband on the phone (he was still downstairs).

“Um.. dear.. you should probably come up here. I think my water broke.”

He rushed upstairs and made the call into labor and delivery.

They told me I could take a shower (already had) and have a snack and then come in to be checked to make sure my water really had broken.

I got together the few last minute items that needed packed and ate a banana.

Meanwhile, my husband was running around killing termites.

Yes, you read that right. Termites. They had been swarming that night and had finally made their way into the house through the vents. They were everywhere. Apparently this is a thing where we live. This being our first spring here, we had no clue. Thankfully they cause no damage and die soon after finding their way in your house. But still. Waddling around leaking amniotic fluid, termites were the last thing I wanted to deal with.

We finished up our last minute preparations, roused a sleeping three year old and dropped him off at a friends house, and made our way to the hospital.

Walking in I was experiencing some light contractions. Nothing that was keeping me from walking, although I was moving slow. It was about 11pm now.

I felt a mix of excitement and nerves. I was not looking forward to the intensity of labor and not knowing how labor will progress always made me nervous. However, I tried to keep my thoughts on how great it would be to finally meet this baby.

When we arrived at labor and delivery, they set us up in a side room and hooked me up to the heart rate monitor. They needed to check to make sure my water had actually broke, but they seemed in no hurry! (Probably because my labor didn’t seem very active at this point).

The nurses and techs did a few other things and as we waited contractions were starting to pick up. I began having to focus more intently on staying relaxed and I was really wanting to get out of the bed! Thankfully, they brought me a stool to sit on and that felt a ton better. Soon after that they confirmed my water was indeed broken and I was already dilated to 6cm!

A few minutes later they finally transferred us to our permanent room. At that point the contractions were very difficult to walk through, but I was just able to make it down the hall to our new room.

Once in the room, I had to get back in bed and get hooked up to the monitor again. Then, it was time to put my IV in (I needed antibiotics since I was group B strep positive). This was the worst part so far. Having to lay in the bed gave me back labor (ouch!) and I hate hate hate getting IV’s.

You see, I have vasovagal. If you’ve never heard of it, it is basically where in response to certain situations your brain decides the best course of action is to pass out! Thankfully, over the years I’ve learned to control it, but getting an IV put in is the worst!

I put in my earbuds to listen to music and turned away from the IV business. My husband stood by my head and comforted me and I remember a sweet nurse standing by my feet rubbing my leg.

I made it through the IV placement and was finally able to get out of that bed!

As I sat back on the stool (thankful to once again be upright and not feeling as much pain in my back!) I alternated between leaning against my husband during contractions and laying my head down on a table between them.

Unfortunately, one of the biggest things I was hoping to avoid (besides an induction) was laboring at night! I am such a wimp when it comes to being tired and boy was I exhausted!

It was about at this point that the doctor showed up and came in to talk with us (approximately 12:30am?). She had a paper that we had signed earlier and I needed to sign again. I could barely lift the pen to sign my name I was so tired! She asked if we had actually read the paper. We hadn’t!

She went through what the paper was about (it was just a release to do things like give me a blood transfusion, etc), but I was barely listening and really wanted her to stop talking at that point! The contractions were coming strong and very often.

I remember my husband comforting me with a little surprise in his voice saying that my contractions were “off the charts” on the monitor!

As each contraction came on, I would motion to my husband and he would come close so I could learn against him. I tried to relax as best I could and let my body do it’s thing. I kept visualizing the glorious moment from my first birth when my son was finally born – knowing this would all be worth it.

I was so tired though. The contractions were getting overwhelming and oh so painful. I knew I hadn’t even been laboring that long. How much longer was I going to have to withstand this? How was I going to be able to make it through?

The doctor asked me if I was feeling any pressure and I answered “no”, thinking there was no way it was going to be time for that already.

The next contraction came and I felt the pressure.

I couldn’t believe it was time to push.

I should have known I was in transition when I felt like I couldn’t take it anymore. I just didn’t think it would go so fast!

My mindset completely changed. I was in the home stretch.

One of my goals with this birth was to try alternate pushing positions. So, I started out standing with my husband holding me up. We both tired from this position quickly and the nurses helped a very dazed me climb into the bed. I sat on my knees holding the back of the bed and pushed from that position for a while too, but eventually my legs gave out again and I turned around to a sitting position.

I would like to add, this whole time I was pushing, I was yelling. It was horrible. I am not normally a yeller. I didn’t yell really for my first birth. It honestly felt kind of embarrassing (not to mention I almost lost my voice), but I really couldn’t help it! I think part of the problem was I was pushing a little too early and it hurt more because of that. By the time I got into the seated position I didn’t feel like I had to yell quite as much. All that to say – you gotta do what you gotta do to get through it!

Anyway, back to pushing. At this point I knew we were getting close. The pressure was getting intense and I could finally feel my baby coming down the birth canal. Everyone was so encouraging during this part and that really made a difference.

I got to the “burning ring of fire” and boy did it burn (I didn’t remember experiencing it as much with baby #1). I pushed through it though, knowing that it meant I was almost done!

My water had broken at 10:00pm and a mere four hours later he was born. I couldn’t believe it!

Now, if you’ve never experienced childbirth, I don’t know how I can adequately describe this moment to you. When your baby finally comes out and you see their sweet little face for the first time. It is amazing. After all that excruciating work… your baby is born. It is indescribable.

I immediately looked down and reached for my baby. I exclaimed “it IS a boy!” (we had both really wanted another boy more than we wanted to admit and K had been declaring since the beginning that it would be a boy). He was handed to me and I finally was able to hold my sweet baby in my arms. 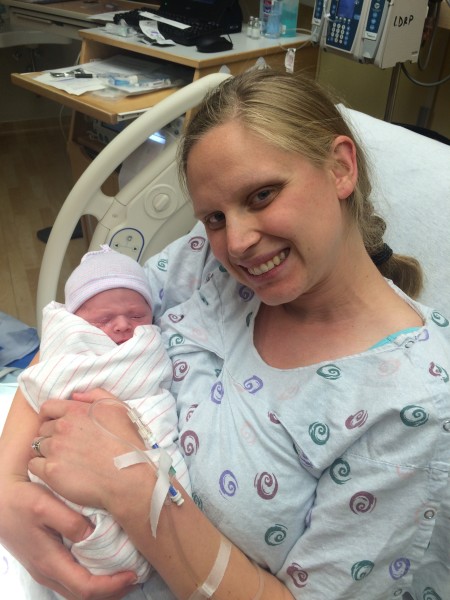 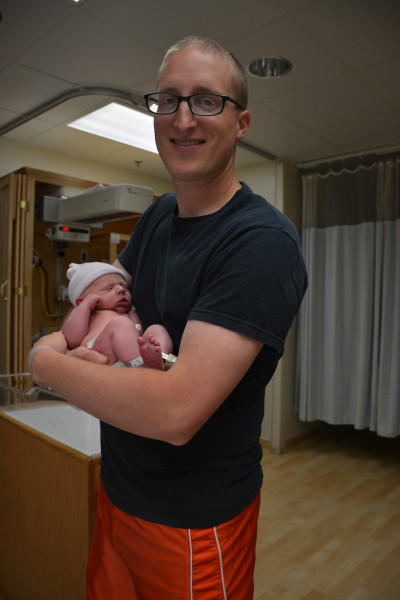 He was wide awake and alert. Taking the new world in. 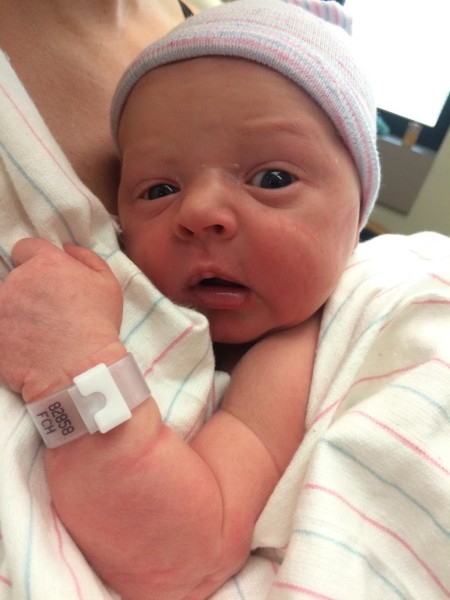 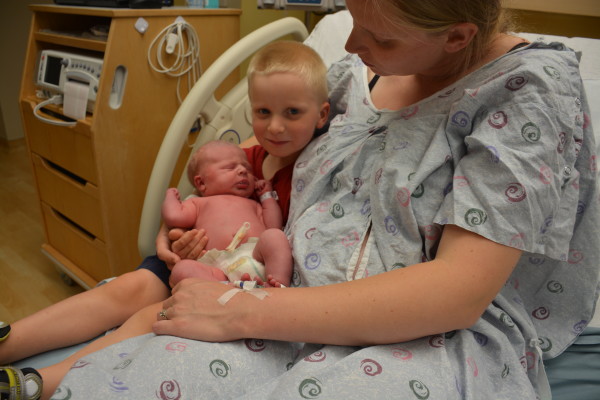 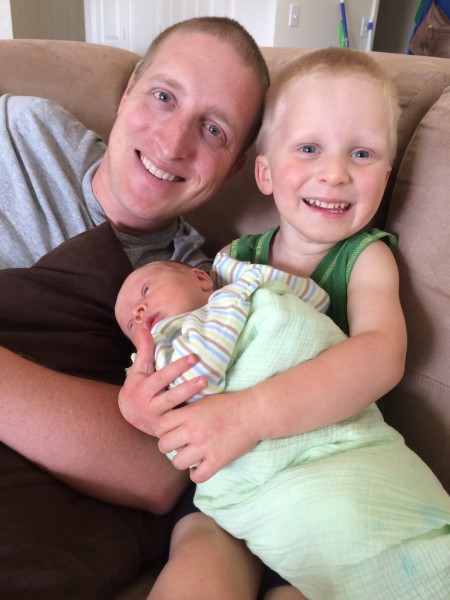 He is absolutely smitten with his baby brother. 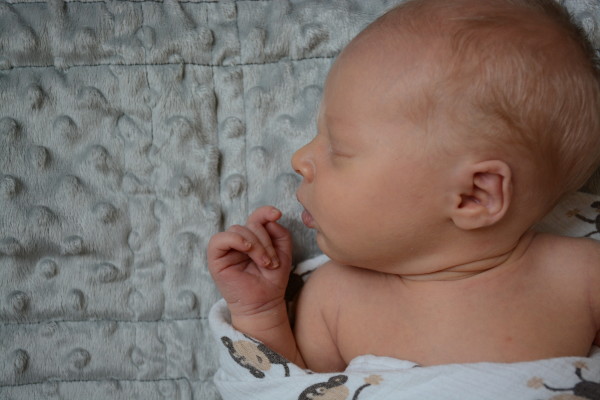 And I must say… 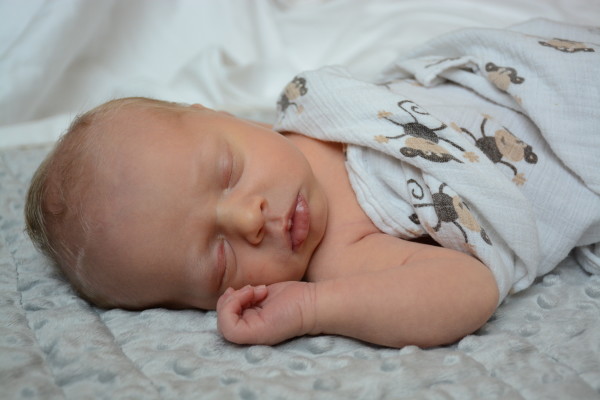 We can’t imagine life without him!