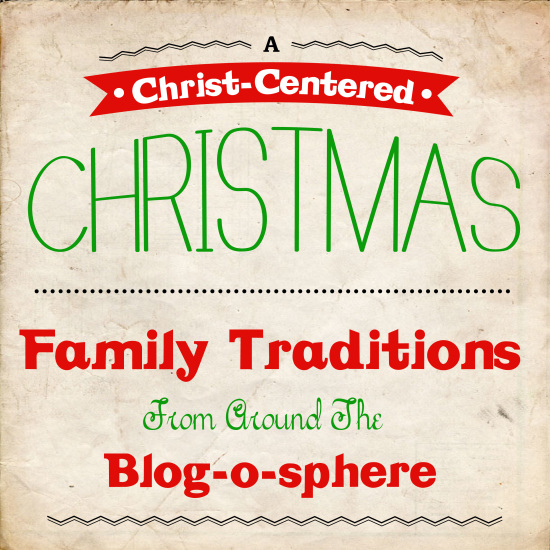 Today I am sharing one of our favorite Christmas-time traditions – St. Nicholas’ Day! 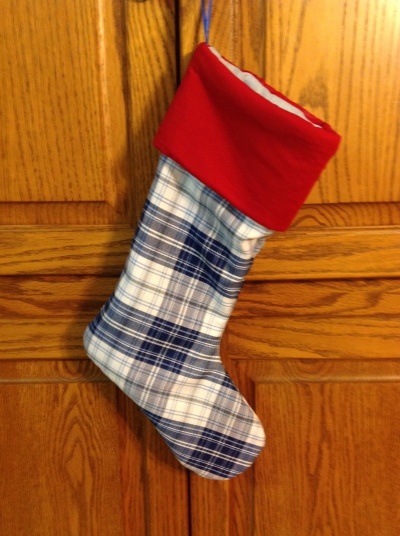 For the longest time I’ve been taken a great interest to the traditional church calendar and holidays. There is something so beautiful about setting your calendar around holidays that point you to Christ, especially when it is so easy to get lost in day to day life. If you don’t know much about the church calendar, I highly recommend The Voice, by the Christian Resource Institute. Since all I had really ever observed in the past was Lent and Advent, I knew I didn’t want to jump into the church calendar too fast and become overwhelmed, so one of the first traditional holidays we adopted was St. Nicholas’ Day.

When I was thinking through how we as a family wanted to approach Christmas I decided early on (with no complaints from the hubby) that we didn’t really want to “do” Santa. Growing up my family did Santa, but I really have no memories of “believing” in him. I may or may not have when I was very young, but mostly it was just a fun part of Christmas. So, I have nothing against Santa, I just decided that our family would try something different. When I learned about St. Nicholas’ day, I knew it would be perfect for us! 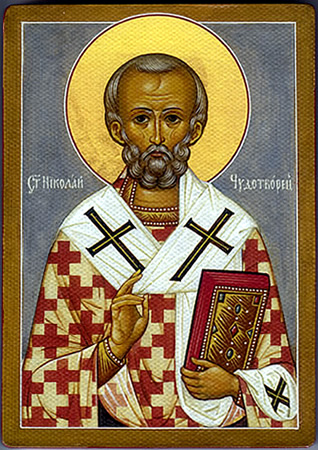 St. Nicholas was a real person who lived in Greece during the third century. His wealthy parents died when he was young, leaving him their fortune. Via the St. Nicholas Center: “Nicholas used his whole inheritance to assist the needy, the sick, and the suffering. He dedicated his life to serving God and was made Bishop of Myra while still a young man. Bishop Nicholas became known throughout the land for his generosity to those in need, his love for children, and his concern for sailors and ships.” The St. Nicholas Center is a great resource to learn more about who St. Nicholas really was.

December 6th, the anniversary of St. Nicholas’ death, became a holiday celebrated in honor of a man who did great and generous deeds in the name of Christ. It is a fun holiday that kicks off the start of Advent in a way that points to the true meaning of Christmas and keeps a little of that magical Santa feeling.

There are many ways to celebrate St Nick’s Day. (For some ideas to get you started, go here.) However, today I want to share what our family has done. 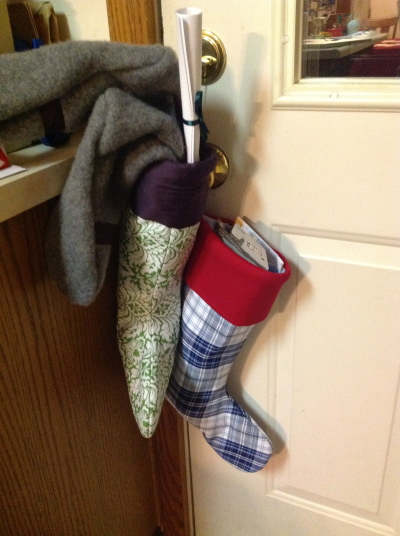 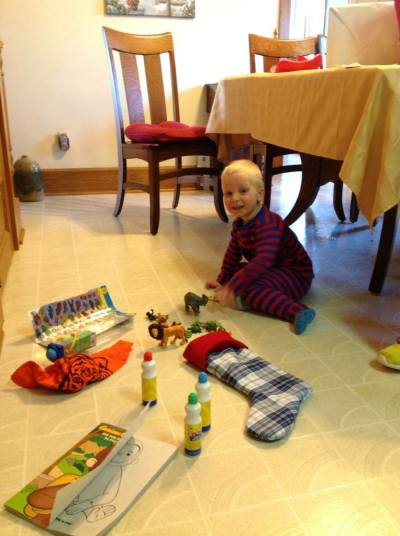 One of the first things I knew I wanted to do was to move the stocking gifts to St. Nicholas’ Day. The tradition started with the story of St. Nicholas leaving gold in the stockings of three young girls who could not afford to pay their dowries and were destined to be sold into slavery. So, on the morning of St. Nick’s day K receives a stocking with small gifts and a sack or two of chocolate coins. For the past two years we were living with my in-laws at Christmas-time, so Auntie C. got a stocking too! 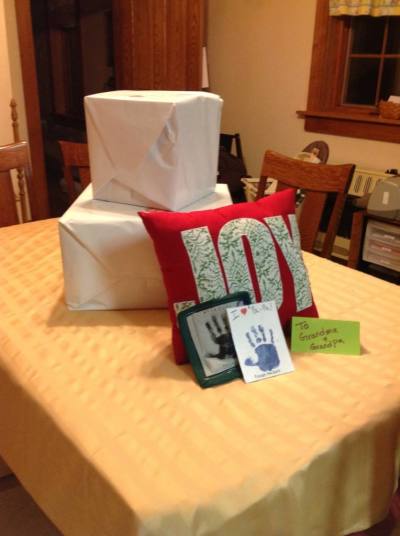 In past years we also did our family gifts on St. Nicholas’ Day. This was less because of a specific St. Nick’s tradition and more because we liked the idea of having time to do gifts together as a family if we were going to be spending time with extended family on Christmas day. This year we are not doing it that way, partially because we decided St. Nick’s Day was a little too early for us for gifts and partially because this year it will just be us three for Christmas day. 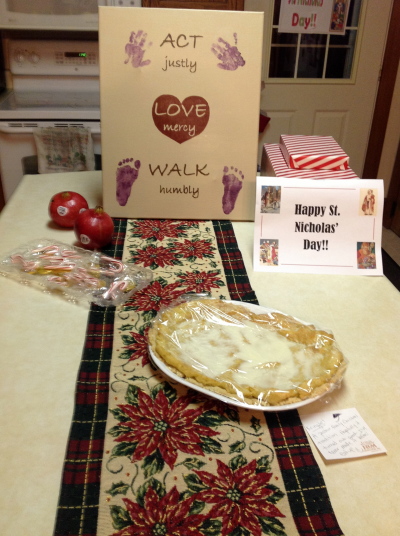 This is another tradition specifically made for our family, but I love it. Growing up, Scandinavian Kringler (or “Kringle” as we always called it) was a special treat that my mom only made every once in a while, often on Christmas morning. So, I decided to continue that tradition and make it for St. Nick’s breakfast. 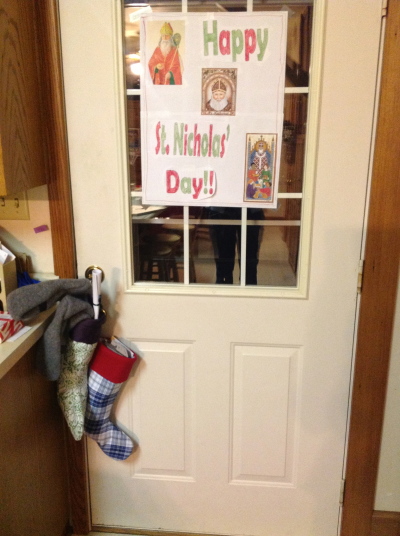 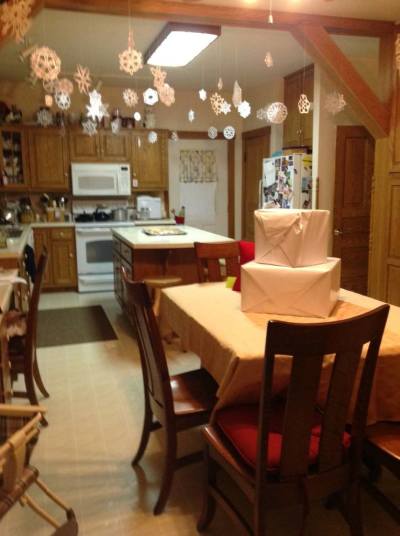 The last two St. Nick’s day’s I have put up decorations the night before to have as a surprise the next morning. I’m not sure what I’ll do this year, if anything, as it’s only a few days away and this pregnant momma needs her rest!

There are lots of other ideas of ways to celebrate St. Nicholas’ Day, but for now we’ve kept it pretty simple. For the future, one idea I’m drawn to (maybe when K is a little older) is making gift baskets with treats, fruit, and small gifts and leaving them on your neighbor’s doorstep. This tradition comes from the story of St. Nicholas living during a very poverty stricken time and leaving baskets of food at people’s doors so they would have enough to eat.

Well, we are excitedly looking forward to celebrating this year’s St. Nick’s day this Saturday. If you want to see what we end up doing, you can follow me on instagram where I’m sure I’ll post pictures of the fun!

It’s not too late – you can still give St. Nick’s Day a try this year! Does it sound interesting to you? Leave a comment and let me know!