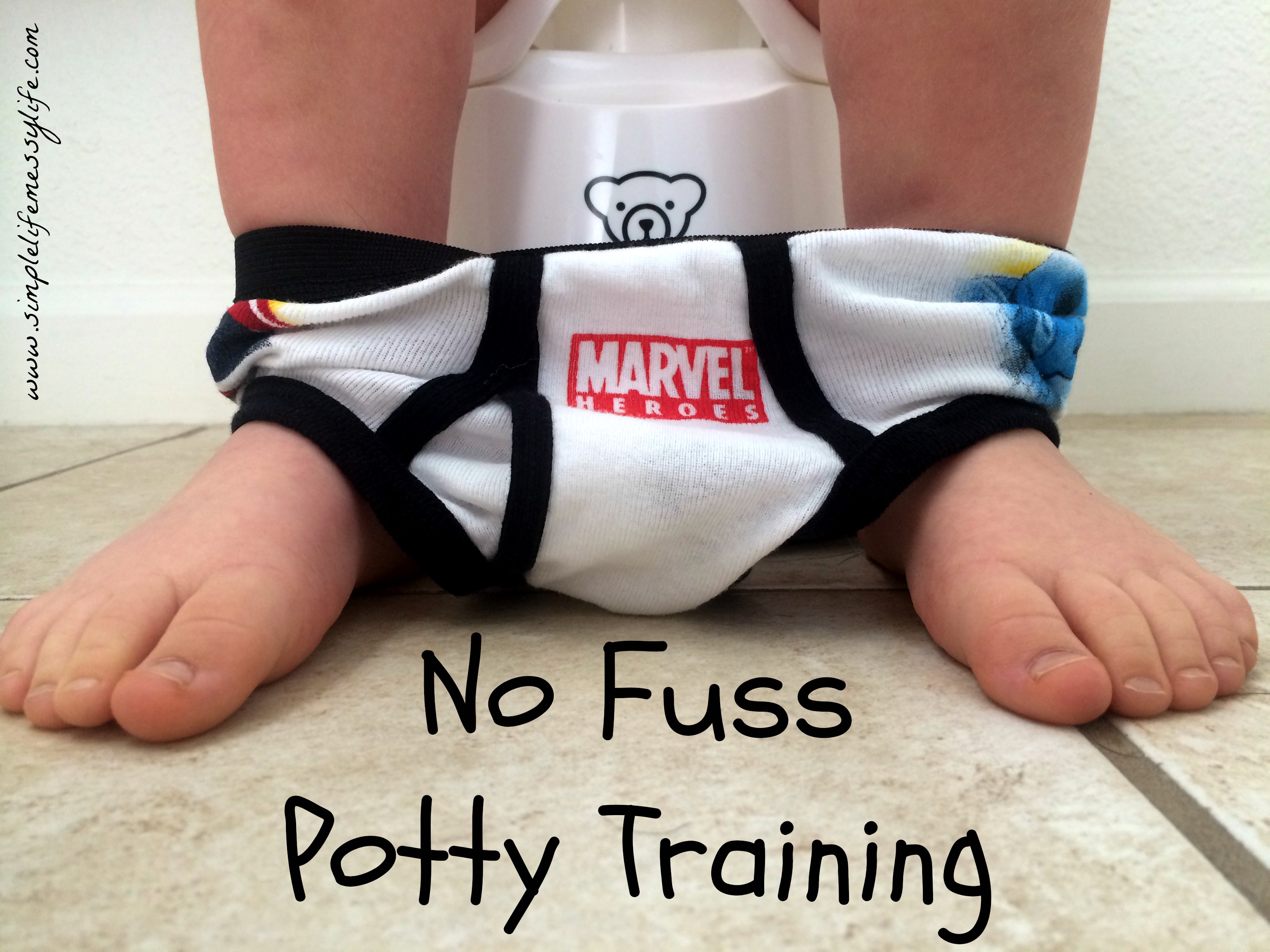 For months leading up to our big move I would tell him, “when we move we are getting rid of the diapers and you are going to wear undies!” I would quiz him: “what are we doing with your diapers when we move?” Once we did move, I knew I didn’t want to spend any more money on diapers, so together we watched the last basket slowly dwindle. I told him, “I’m not buying anymore. When they are gone, you are going to wear undies.”

Well, that day came sooner then I was ready for. I was still unpacking, the house was a disaster, and I had a to-do list a mile high. I seriously contemplated buying just one more pack of diapers and sneaking them into the basket, hoping he wouldn’t notice. But, I didn’t. I decided to stick to what said and we went for it – ready or not! He averaged one (or maybe two) accidents for a couple days and then he was good to go. It hasn’t even been two weeks now and he is accident free and able to go run errands, play by himself in his room, and go potty all by himself when he needs to.

So, how did I manage to so quickly and easily potty train my 2 1/2 year old? Well, I am sure a lot of it has to do with his personality, but I thought I would share a few things that I think really helped make the transition from diapers to underwear easier. Before I delved into potty training I read pretty much every potty training article I came across. I loved seeing how everybody did it and what worked for them and what didn’t. I hope that you are able to pick out a few things from our experience to make potty training that much easier for you!

1. We started using the toilet early.

Before K was born, I happened to read about this really neat thing called elimination communication. If you’ve never heard about it, it is basically a method of learning your baby’s signals early on and helping them eliminate using the toilet instead of a diaper. You can read more about it here. While we didn’t do full-blown EC, we did use some of the principles off and on. I taught K how to use the potty when he was just a tiny baby, and had him use it fairly regularly while he was a baby/young toddler. I think this really helped because it meant that using the toilet wasn’t a completely foreign concept to him when he made the transition to being potty trained. I’ve known of a lot of kids who are scared of the toilet or reluctant to use it and seeing it as a normal part of their life from early on can really help avoid that.

This is a tip you will hear over and over again and it can be a hard one to actually put into practice! What does it even mean to be ready? For us, ready meant two things. First, that K was ready to be taught to use the toilet and, second, that he was able to use the toilet by himself (pulling his pants down, etc). When K was 18 months old we decided to give early potty training a shot. It went really well for about a week and then he lost interest. I think in many ways he could have be ready then, but it would have taken a lot more effort and time on our part to see it through. Because of that, we ended up putting it on hold. Due to life circumstances and the schedules we were on, it didn’t make a lot of sense to try again until this summer, after we made a 14 hour move. At that point, he was definitely ready!

3. We talked about it constantly.

Little kids understand and remember a lot more than we often give them credit for. Months before our move I started talking to K about how he was going to wear undies after we moved. I reinforced it whenever I could. We would talk about it to Grandma, to daddy, to anyone who would listen! We said we were going to throw away the diapers. We said he was going to be a big boy. Almost every time I changed his diaper we would talk about it. We watched as his last basket of diapers dwindled to nothing, and when I asked him if he wanted to put on some underwear, he was totally ready and excited.

Other than talking about it a lot, I didn’t make a big fuss over potty training. If you remember, I was still unpacking and had a lot to do! There was no three day potty training boot camp. I didn’t give him salty snacks and load him up on juice so he would pee more. There were no charts or treat jars. I didn’t contain him to one room. I didn’t drag him to the toilet every 15 minutes. Basically, I just put some underwear on him and we went with it! I put a little potty in the living room and he had a potty seat insert in his bathroom upstairs. I eventually put another little potty in his bedroom too. For clean-up, I kept it simple with disinfectant wipes for the potties and a bottle of vinegar and some rags to clean up accidents.

Somewhere between 1 1/2 and 2 years old, K started really resist me taking him to the toilet. I decided to not push the issue and only took him when he wanted to go. I knew that I didn’t want to have that same problem with potty training, so when I read about someone who didn’t make their child use the bathroom during potty training, I knew that was what we needed to do. The only times he was required to use the toilet were before bed and before we went out somewhere. Other than that, I would just frequently remind him to “keep his underwear dry” and to “use the toilet if he needed to go potty.” I think I said those things a couple thousand times! If he had an accident, I just helped him get to the toilet quickly and said “uh oh, make sure you go on the toilet next time!” Keeping the language positive really helped. I wasn’t forcing a stubborn toddler to do anything and because we had talked about it so much and I encouraged him a lot, he was excited to do it on his own.

Instead of giving him treats every time he used the toilet, I told him early on that once he was keeping his undies dry I would buy him some super hero underwear. Super heroes were a new obsession, so it was the perfect reward to help give him just a little extra motivation. When he would have an accident, I would remind him about the reward as encouragement to keep trying. When he finally was staying dry we went to the store and picked some out. He was so excited and proud of himself!

This was probably one of the most important things for me. I didn’t want to have to remind him constantly or make him use the bathroom every 30 minutes. I wanted him to recognize he had to go and just go all by himself. What can I say? I’m just lazy like that! So, from the beginning I had him do as much as he could by himself. I do usually ask him if he needs any help when he says he has to go and I help him wipe a lot of the time, but for the most part he does go all by himself.

I really couldn’t believe that the potty training transition went as smoothly as it did. I must admit, I was a little nervous! However, it just goes to show that potty training doesn’t have to be all horror stories! Hopefully some of what we did can help in your potty training endeavors. If you have any questions or tips of your own, please share them in the comments below!

And… Keep your fingers cross for us. We have the ultimate potty training test coming up this weekend – a 16 hour car trip!