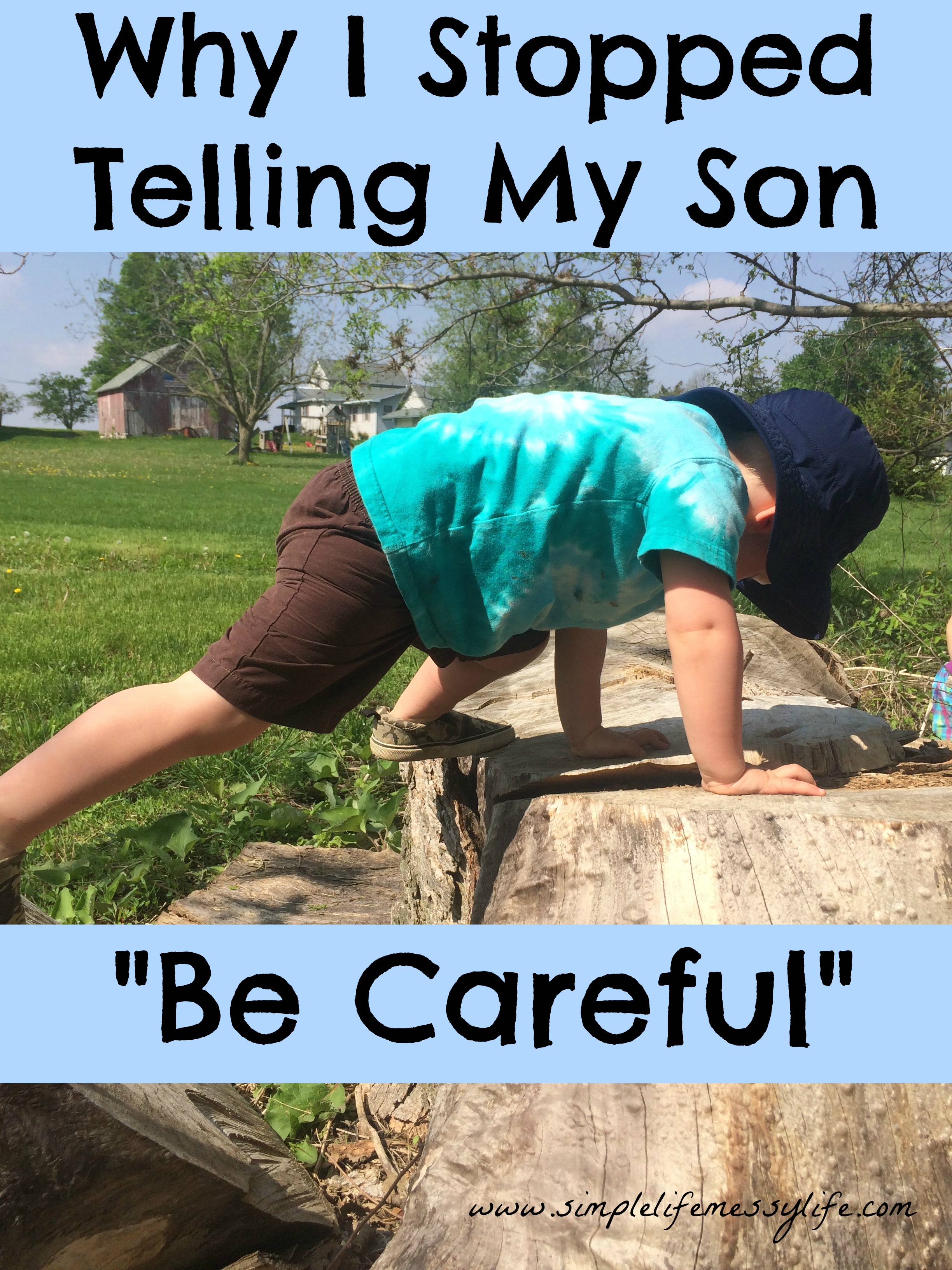 “Be careful!” The words spilled out of my mouth without any thought as my son attempted to navigate some rough terrain in the backyard. I must have said it at least a half-dozen times already in the half hour we’d been playing outside.

It was then that I knew I had a problem.

I had fallen into a bad habit and it wasn’t helping either me or K. I knew I needed to make some changes in the way I was communicating with him. Here are four reasons why I knew the phrase “be careful” needed to be virtually eliminated from my vocabulary.

1. It didn’t work.
Even though he heard me say it all the time, I doubt my rambunctious, fearless toddler really understood what it even meant for him to “be careful.” It didn’t communicate any practical information.

2. I didn’t want “be careful” to become synonymous with “don’t do that.”
If it was something I really didn’t want my son to do, I needed to get to the point and clearly communicate my expectations.

3. It eliminated his ability to learn to weigh risk.
At this point he doesn’t really understand why standing on a foot tall rock is less risky than trying to scale the side of a five foot trailer. However, I’m not always going to be there to tell him he should be careful. He needs to learn how to weigh a situation for himself and see if the benefit is worth the risk.

4. It didn’t teach him how to overcome obstacles.
I don’t want my son (or any other future children) to be driven by fear – whether it is in the small things now, or in the bigger things later in life. That said, fear does serves a purpose, it lets us know that we probably need a plan for overcoming obstacles in our way. “Be careful” doesn’t teach him how to climb a rock wall and it won’t encourage him to chase big dreams later in life either. K is naturally an adventurer now and I want him to be able to stay that way even as he grows up.

5. It removed his ability to face real life consequences.
Pain is a good reminder to not make the same mistake twice. Although sometimes pain is the obstacle we need to overcome, a lot of the time it can remind us to plan out a better strategy next time or just avoid something altogether.

So, with these things in mind I’ve adopted a new strategy. When the words “be careful” are threatening to pop out of my mouth I try to evaluate using these 3 questions:

1. “Is this something he can figure out on his own?”
If that’s the case, I shut my trap.

2. “Does he need help figuring out this challenge?”
If so, instead of giving a generic “be careful” I try to give specific instructions for what he needs to look out for. For example: “stay away from the edge of the deck, if you fall it will hurt you;” “hold onto the railing as you go down the stairs, it will help you avoid tripping;” “that branch is dead, if you pull on it it could break off and hit you;” or “if you are going to swing that stick, stand away from where other people are standing.”

3. “Is this activity risky enough that, should he fail, he could be seriously injured?”
If not, I usually give him a warning that he could get hurt by what he is doing and then let him learn the consequences for himself. If it is, then I either stop him or give him more assistance to lessen the danger.

I’ll admit it, even with these steps, “be careful” still pops out of my mouth here and there, but I am trying to break the habit!

What do you think? Do you find yourself saying “be careful” or another phrase too much? Share your experience in the comments.